What is Konjac Noodles? 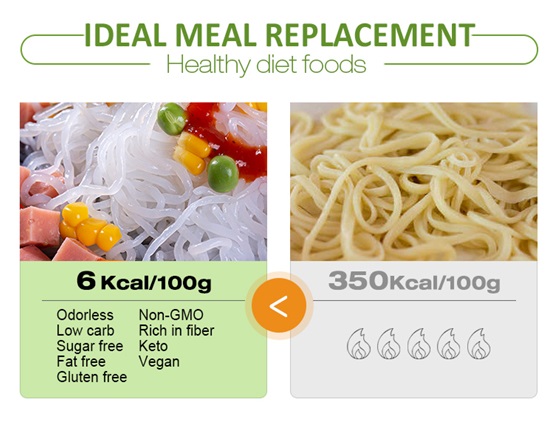 Konjac noodles are a pasta like food made from the bulbs of the konjac plant and are popular in many Asian cuisines. Konjac noodles are high in fiber and contain no carbohydrates, making it a zero-calorie meal. Konjac noodles generally don’t taste like wheat pasta, but they are often very similar to konjac and can be used interchangeably in many recipes. Chefs around the world have praised konjac noodles for their healthy properties and “guilt-free”.

Wholesale Low Calories Konjac Noodle Manufacturer Konjac Noodle are a low carb alternative to traditional pasta, known as konjac noodles or Jurong noodles, and Japanese cooks call them konjac noodles or white jade noodles, usually in powdered form. Konjac noodles are made from the bulbs of the Konjac plant. The fiber-rich konjac bulb looks like a giant root, it doesn’t have a definite flavor, but it also doesn’t have any nutrients or calories. It’s nothing more than a soluble fiber called glucomannan, which can be ground into a powder when cooking and used in many foods.

In noodle making, this powder is usually mixed with water and then formed into smooth filaments. If packaged in liquid, the threads can be sold immediately as noodles. Otherwise, they are slowly baked to dehydrate and then packaged as dry food.

Most konjac noodles require a variety of sauces, spices and additives. In Asian cuisine, chefs often use konjac in stir-fries and noodle soups. Konjac noodles are a very flexible ingredient that can be used in a variety of dishes and preparations.

In some places, these noodles are called “miracle noodles” in the market. The name comes primarily from the zero sum nutritional content of noodles: they’re soluble fiber and very little else. They also swell slightly, which can trigger a feeling of fullness, which can lead to less eating. However, dieters must be careful not to offset the calorie content of the noodles with too many sauces and toppings.

PREV : Konjac Noodles: Are you still worried about your increasing weight?

NEXT : Konjac Healthy Noodles: Where Is It Really Healthy?